1. What is Lolita Fashion?

For more information about the Lolita Fashion sub-styles, please read this article. 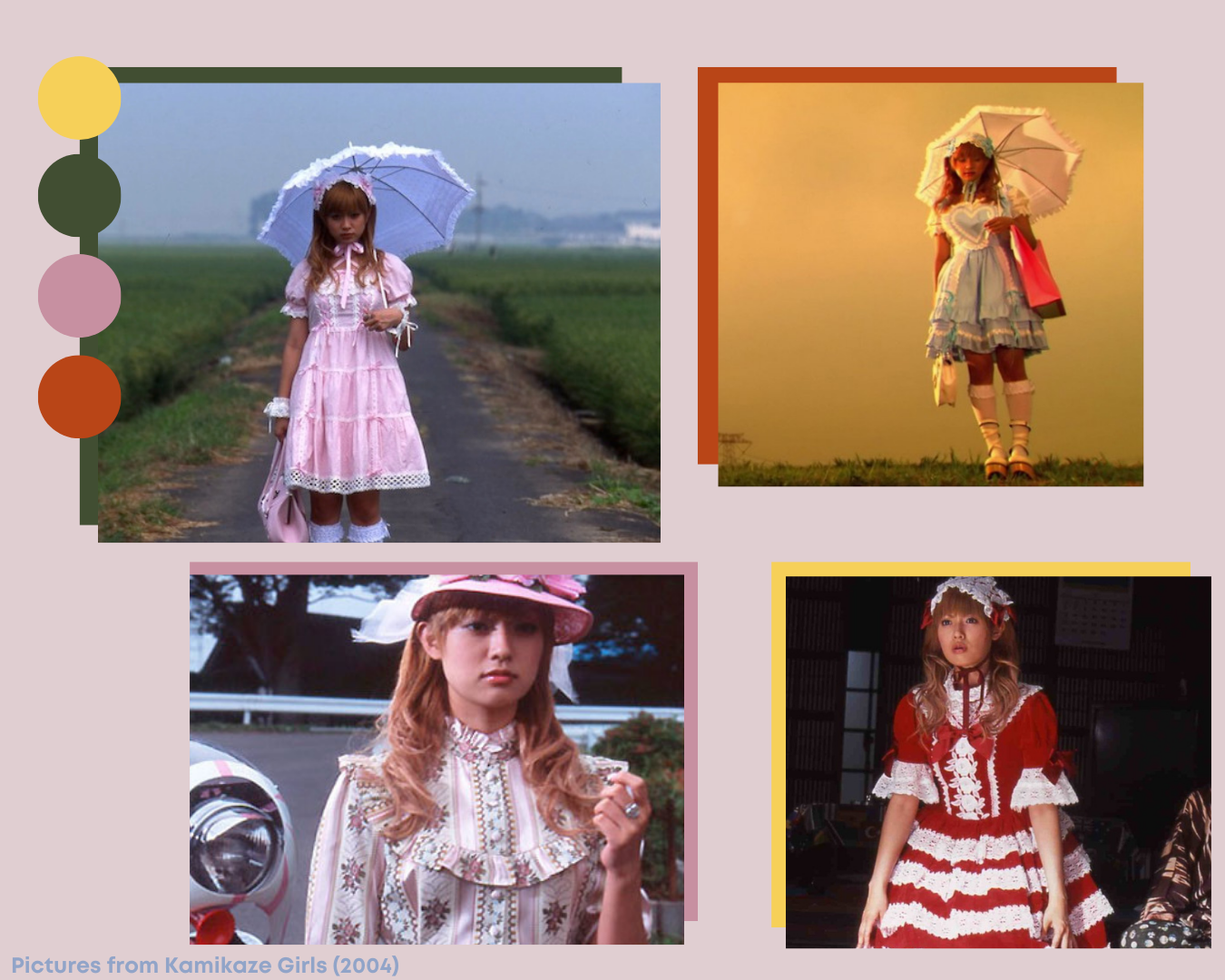 This subculture tries to capture the innocence of youth, and the nostalgia of the 19th century. Its main goal was to cover a lot of bodies with aesthetic cuteness. Japanese initially called it Otome-Kei or Kawai style, but over time, they decided to use the name Lolita (ro-ri-ta) because it sounded so cute in Japanese. Through fashion magazines, the name became known and widely used and is still used today. 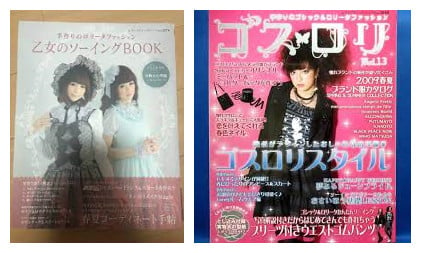 The standard attire for Lolita Fashion is a Knee-length puffy jumper skirt with a blouse or a knee-length one-piece, Maryjane shoes, a pair of cute tights or socks, and a headpiece. 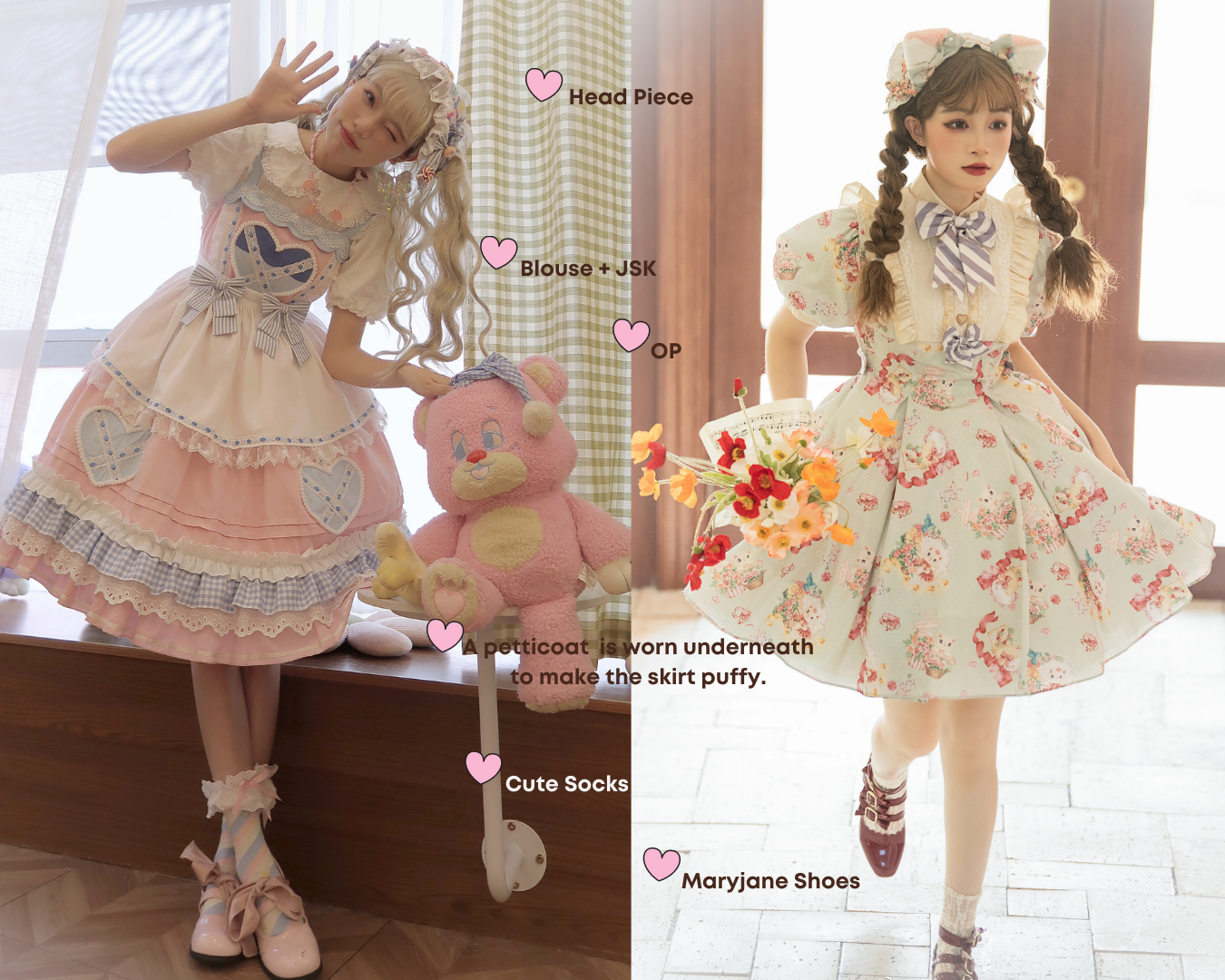 A Lolita outfit is composed of basic components. These can be broken down into head, top, bottom, inner, legs, and feet. Each element is essential in creating the proper Lolita aesthetic, but as you will see, there is much room for variety.

2. What Lolita Fashion is Not

A. NOT the Book Lolita

In the west, Lolita fashion is almost always referred to as "Lolita fashion," with "fashion" added to differentiate between it and the novel.
The English-speaking community started using the term EGL, which stands for Elegant Gothic Lolita. In the early days of Lolita fashion, this was an umbrella term used for all Lolita, even if it didn't resemble what we generally think of when it comes to gothic. In my opinion, EGL is a great term to use. It's well established, and it will lead you to accurate results. But when it comes down to explaining what EGL stands for, you still can't escape that word - lolita.
When people ask, "is Lolita fashion anything like the book?" They're generally referring to Vladimir Nabokov's Lolita. However, there are actual books about Lolita fashion. For example, So Pretty Very Rotten is a collection of essays and comics about actual Lolita fashion and community. - LovelyLor

Lolita Fashion is just the clothes we wear. As we know, we can't tell about a person by the clothes they wear. Likewise, you can't tell their sexual orientation or gender identity from what they wear. This is just one of the numerous misconceptions about Lolita Fashion. It's wrong because people being obsessed with something doesn't mean that it is a fetish in itself.
There are so many different fashion styles, and people wear different styles of clothes for different reasons. Therefore, people who are not familiar with Lolita fashion should be less speculative and discrediting. The only way to know what someone is wearing is to ask them, don't assume.

The idea of living dolls became popular around 2010 when Valeria Lukyanova gained attention for her Barbie-like appearance.

The living dolls are just a misunderstanding of Japanese kawaii fashion. They have the commonality of Japanese kawaii style clothing, and they also have similar looks to the Victorian era dolls. This is because the Victorian era dolls were copying the fashion of that era, and Victorian-era also inspired lolita fashion. Other than that, both have nothing in common.
As a woman, I do not like the name "living doll." Dolls are inanimate objects, and it would make us less human to be called living dolls. Suppose you identify as a living doll; it's fine. But make it clear that this is your personal preference, and it does not represent the entire community.

Lolita fashion is not cosplay. This is 100% true.
Lolita fashion is a street style that originated in Japan. When you're wearing it, you are still yourself. You are putting on clothes, just like you would in any fashion, to represent yourself and present yourself in a way that you enjoy.
Cosplay, however, is when you are trying to replicate a fictional character, and you are presenting yourself as a fictional character.
There are times when both mix because there are fictional characters who wear Lolita fashion. But when you are replicating them and presenting them, you're not wearing Lolita. You are representing that character.
There is also cosplay Lolita or Lolita cosplay where people create a cosplay and then use Lolita pieces to help represent that character, but they're still presenting that character.
And then there's also character-inspired Lolita which takes more abstract ideas to represent a character through a Lolita fashion coordinate, but that person is still being themselves.
I think what it ultimately comes down to is that people mix the two, but you need to ask yourself, Is this a cosplay? Or is this a Lolita fashion coordinate? In the end, the main question remains, are you representing a character, or are you representing yourself? - Lovelylor

3. 5 Tips for Being in Lolita Fashion：

The main goal of Lolita Fashion is to cover a lot of bodies with a cute dress. Especially when you wear a JSK (Jumper Skirt), it's inappropriate not to wear a blouse under the straps.  You can also choose a cutsew or cardigan to go with your straps dress.

2)Avoid Wearing a Lolita Dress Without a Basic Fullset

A basic fullest of a Lolita Fashion includes a dress(a Jumper Skirt with a blouse, a one-piece), a pair of cute socks or tights, Maryjane shoes, and headpieces. You can go without a headpiece, but cute socks and shoes that match the style of the Lolita dress are essential. 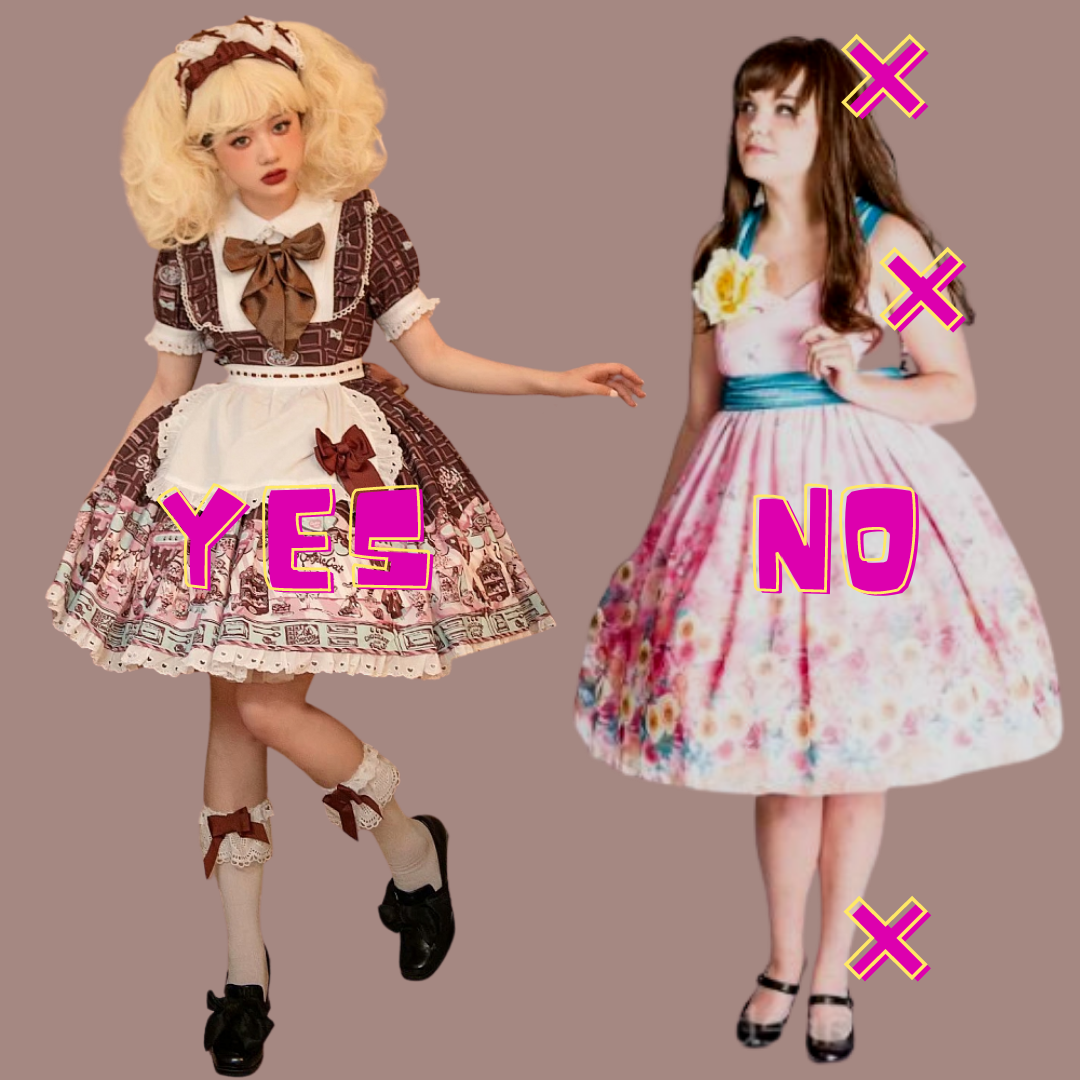 3)Stick to One Style at First

It's expensive to do a style change. When you are just starting, you need to be sure what style you're currently into. Once you put all the pink stuff together and see something like a lavender dress next month, you can mix that lavender dress with your pink accessories, and it won't be a problem. You don't have to buy a whole new wardrobe. But if you choose Sweet and then you find out that you want something Gothic, you'll have to buy a whole new outfit before you can wear it. You have to buy shoes, socks, tops, and headpieces that match the Gothic style. Sometimes the colors don't match, and the patterns don't match. So, if you're going to choose a style, think about it before you start buying things.

4)Be Careful of Getting stuff from Mainstream Fashion

When you're starting, it's not a good idea to try and get your Lolita stuff from mainstream shops. This is because most of the time they don't work. When starting, you will think anything that looks cute would work, but it doesn't. So until you're more confident and know what you're looking for, just avoid mixing Lolita Fashion with mainstream fashion when shopping for your outfit and putting things together.

Sometimes, you can find amazing things, like thrift things, that are just absolutely perfect for what you want to do. But you're unsure of what is loliable (Lolita and usable, used when an item is not necessarily made for Lolita but can be used in coordination) and what isn't. For example, the bag on the right below is more loliable than the one on the left. So it's better not to buy from mainstream shops because you might make a mistake.

If you find the perfect pastel socks, they are super cute, but they're most likely not going to go with your coordinate. Besides, it is very hard to match normal fashion shoes with Lolita fashion. So when you're just starting, make sure to only buy from places where the shoes are specifically made for Lolita fashion because it is really hard to find shoes that go well with a Lolita dress.

We don't like to mix fashion that is primarily sexy with Lolita, which is primarily not sexy. So a newbie Lolita should stop over-explaining to people because it's unnecessary.

You can give some basic background information on Lolita Fashion; like it's a subculture fashion from Japan and just clothes with nothing else attached. However, it is unnecessary to over-explain because you may seem weird. Besides, you don't have to justify your sense of dressing to anyone.